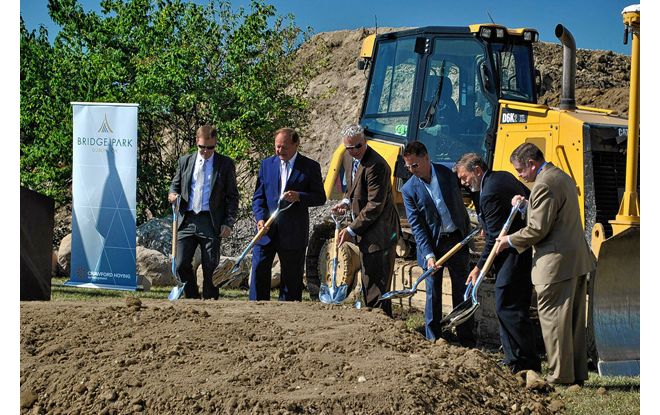 Preliminary site work at the Bridge Park sites in Historic Dublin and at the northeast corner of Riverside Drive and state Route 161 has been ongoing for months, setting a background of dirt mounds for the official ground-breaking for the $350 million mixed-use development.

At the Sept. 15 ground-breaking, Crawford Hoying principal Brent Crawford said construction on the first phase of Bridge Park had been going on for a couple weeks and the opening could come as soon as October or November 2016.

“It’s fully under construction,” Crawford said of Bridge Park West, a development that will bring condominiums, retail and office space to Historic Dublin.

“The walls will go up over the next few weeks.”

“It’s a very exciting day for us,” Crawford told the crowd at the ground-breaking as construction vehicles buzzed by the active site.

With the Bridge Street District, Dublin is hoping to lure young professionals, empty-nesters and business to an area they envision as a live, work and play destination.

“Mostly we’re proud, proud to be in a situation where we can help reshape a community and help prepare it for the future,” Crawford said.

Dublin began working on a vision for the Bridge Street District, which covers about 6 percent of the city, in 2009.

“This is a great representation of looking into the future,” Dublin City Manager Dana McDaniel said during the ground-breaking.

The development, McDaniel said will bring new jobs, businesses and residents to the city.

“Thanks to Crawford Hoying for making this vision come true,” he said.

Leasing of space in Bridge Park is has been under way for some time and Crawford said about 70 percent of commercial space in the first phase has been spoken for. Normally, businesses wait for construction to start, Crawford said.

“It speaks to the interest in Dublin,” Crawford said.

In fact, Crawford expects to begin announcing Bridge Park tenants during the next few weeks.

A Cameron Mitchell restaurant has already been announced for Bridge Park West.

Despite a fall construction start date, Crawford Hoying officials said they are optimistic the first phase will be done next fall.

Concrete is expected to be poured before weather turns too cold this year, Crawford said.